When sleepless in Alameda, the only thing to do is read (but I finished my book earlier this evening), watch TV (nuthin on) or blog. Here I yam. 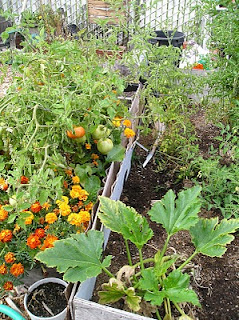 I’m slowly adding to the wonder that is the garden. I planted corn in a very small box — usually I have tried planting a row (one line) of corn, and we get perhaps a dozen ears. But I know it does better when it’s closer to other stalks, in multiple rows. The pollen needs to run into itself, and in one straight line that just doesn’t happen. Our friend Phil says that we have to have sex with our vegetables to make sure they pollinate. I’m lucky — Erin and Jack have a couple of hives just a block away, so we have bees enough. But Phil is right — in one orderly line, corn can’t very well mate itself — so I did take handfuls of pollen and sprinkle it on other stalks the past few years, with limited results. The small box this year equates to intensive planting — in a 6-foot-square space I planted 20 seeds. If they all come up, they’ll be close enough to pollinate each other. I shouldn’t have to interfere. Leave the corn to sex itself. Let’s just call this my last effort to grow corn in a small city plot. If this method (completely unrehearsed and untested) does not work, then hey-dee-ho, we have another trial and error for the books, et on y va, oui?

The above garden photo was taken last September, btw. Not recently. So far most of the garden boxes are barren, still, just soil or no soil at all. And because the Tax Fairy just came, or shall we call it the Tax Ogre, I don’t think I’ll be ordering any loads of organic soil anytime soon. Which means, hunt and peck for loose soil in the neighborhood, or where I can salvage it from elsewhere the yard.

Next on the garden agenda is clearing weeds from the annexed garden outside the fence, and panting the larger vines — pumpkins, other squashes. The city-paid landscapers (mow and blow guys) just ran over and shredded our long garden hose, and though they promised to replace it, I have yet to see one appear. Which means we’ll probably have to make do without one. That means creative watering this summer. What else?

Meanwhile, indoors, the saga of neverending laundry and ironing continues. Dishes, dinners, cats and kids. There is still frozen fruit from last year to be made into jam, to make room for this year’s goodies in the freezer. I just spent $7 on a groovy loaf of health-store bread that molded over in 2 days. TWO DAYS. So the chickens are enjoying 12-grain, locally made artisanal bread this week (grrrr). And because of that, it’s back to the bread-baking for me. I like baking bread but the fam has shown no interest in eating it (it’s not sliced!!).