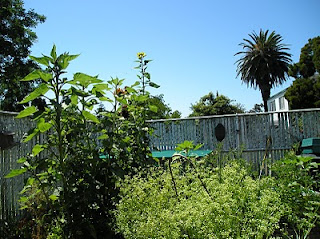 Did I say the garden was taking off? It is, kind of. And kind of not. Seems like the weather has been cooler, more overcast this year, thus far, and so I’m not getting quite the volume I hoped for. Yet. (Garden photo, LEFT, taken this afternoon — can you tell we live in California? Green roof to left/rear is the chicken coop roof.)

I should try to do as the Dervaes family does down in Southern California and chart my productivity from the garden. Their goal for the year is 10,000 lbs. of produce, including duck and chicken eggs, honey, fruits and vegetables. We won’t get anywhere near that. But so far we’ve enjoyed:

How many eggs? ZERO. However, I just started giving them laying mash in hopes of waking up their ovaries. Extra vitamins are supposed to help. I also throw in a handful of toasted crushed eggshell (homemade) or crushed oyster shell (store-bought, though I could try to make it at home). Supposed to make stronger egg-shells. I guess the next gag is to toss in some golf balls to trick them into laying.
We like eggs. We want to eat our own eggs. We are a little impatient. How about some photos of those darned chickens?

LEFT is bossy Poppy, a Rhode Island Red who has recently claimed the crown as Queen of the Coop. She pushed Violet (speckled hen, CENTER) out of the way for this job. Violet is second in command, with timid Bluebell (Americauna). RIGHT, a little blurry, is Rosie, the former squeaking runt, now the largest, but still a bit bullied. She doesn’t know her own power. They are very entertaining, except Poppy, who is rather mean. I guess that’s why she’s the boss. I still miss Daisy, who turned out to be a Donald and had to go live elsewhere.

Here are some garden shots, for your gustatory delight.

LEFT, green beans, twining on poles as well as thick sunflower stalks. Little green Japanese beetles (“ladybugs” of the wrong color) are eating lacey holes in the leaves, so now I pick off the bugs and feed to the chickens. CENTER is my arbor of Red Flame grapes, very small but there are so many bunches of grapes — can’t wait for that harvest. RIGHT, the outer garden against the sunny west-facing fence: various squashes, sunflowers and a lush zucchini (you can see one of its blossoms). 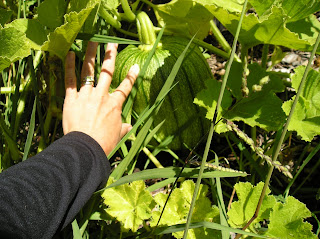 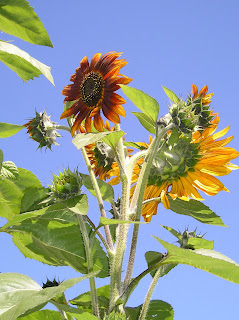 LEFT, there’s a pumpkin in the outer garden, one of two so far. One is yellow (Cinderella) and this one is striped green. You can see its size relative to my hand. RIGHT, some of the sunflowers in bloom, way over my head. I think the tallest is at least 7 feet.
Indoors, the produce has to go somewhere. I have frozen one quart of mixed squash and 2 quarts of green beans. I have some mixed berries (raspberries, strawberries, blackberries) in the freezer now on a tray. We use these later in the year in smoothies or in jam. No chemicals on the berries mean they spoil very fast — maybe 24 hours from vine to compost heap if we don’t eat them. I started freezing anything left after breakfast and will end up with a gallon ziplock bag by summer’s end. I also froze some whole ears of corn on the cob from this week’s marketing — whole, in all the leaves and silk, no pre-blanching, peeling or anything. Just into the freezer — and later, into a large ziplock bag. If you’ve ever bought frozen corn on the cob in midwinter, you’ll know it tastes disgusting. I hope our home-frozen ears will not be mushy or boiled-tasting like those from the Green Giant.
The green beans go crazy some days — if we don’t pick at least every other day, the beans grow too long, and too tough. I am making a summer soup right now from a leftover spaghetti squash (not the one I just picked), 2 ears of corn from the market (6 for $1, locally grown), and the overgrown green beans will make a tasty vegetable soup, which I’ll dress up with tarragon, white pepper, whole milk and a topping of cheese. It’s what’s for dinner.
How does your garden grow? Comment?