Such days, such busy days. Been reading, working in the garden, taking care of chickies, cats, birds, people, and self. Weather, projects, house, life. Busy days, I tell you. Biggest project has been the raised beds. Here come the photos, my little chickadees. 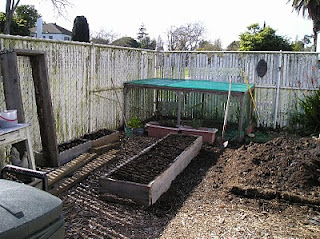 So here’s the chicken coop with a new green corrugated roof. That took us a weekend day to repair. The coop still needs a solid door, as we discovered last night — either an electric fence or steel spikes dug down at least a foot into the earth. Yes, our raccoony friends were here overnight and dug underneath, into the coop. Luckily, the chickies still sleep in the garage, and now we know the gambit. So that’s on the list.
As for the raised beds, we had 3 from last year that were still good, but the large bed had rotted. It has been merely a pile of worn-out topsoil, seen at the right of the photo. 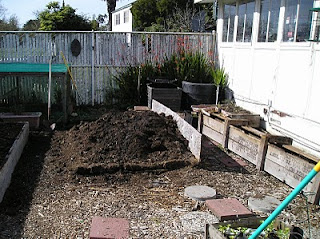 Another view of the dirtpile, and a large shipping crate (at right) that we got from my dad. We’ve been using it for 3 years as a planter box but it was never much good, since it wasn’t completely sealed. The dirt was pretty worn out, too. We tore that sucker apart and used the boards to build our new raised beds. 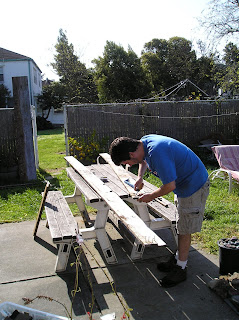 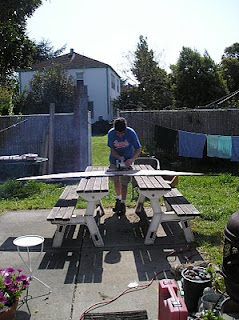 Here’s the power tools in action, along with my favorite construction worker. Note laundry hanging dry in the sun. *Solar power* = love it! 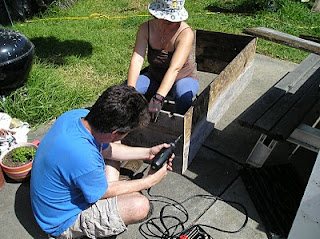 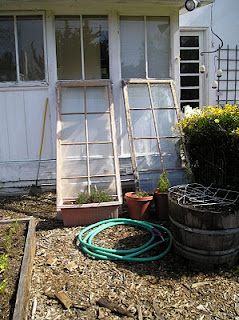 Salvaged French doors from Freecycle make a lean-to greenhouse where we will grow our melons and peppers this year, with luck. It’s too chilly where we are, right on the water, so maybe the glass will help. The barrel (salvaged from Napa winery) was my former water garden-fishpond, that became a dead zone because raccoons were always eating anything alive. It became a mosquito-hatching nursery after a while. Now it’s holding soil, compost and beet seeds. 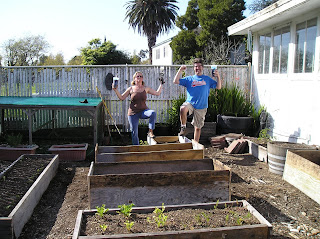 End of a LONG day shows us dripping with sweat, enjoying a well deserved fountain beverage from the local quickie mart. We were good and drank water and sun tea all day. Six new boxes, total of 10 inside the fence, with raised beds outside the fence as well (eminent domain). Still need some dirt to fill them (they are halfway full with dirt and compost). All materials salvaged, found, from stash or collected from Freecycle. Total cost: $0, unless you count the soda drinks. 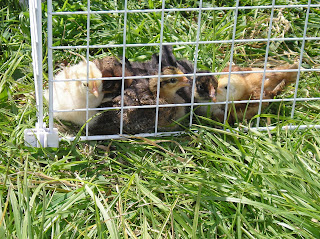 Here’s a gratuitous chicken shot, because they are so darned cute, enjoying the sunshine, grass and scratching for insects. They are even larger than this now. Will post new pix soon (when it stops being rainy). 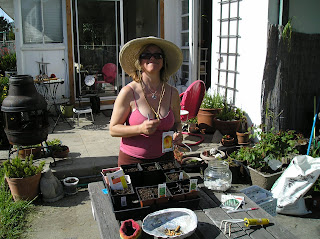 Here I am, planting seeds in little six-packs. Have started seeds for leeks, tomatoes, various peppers, cucumbers, zucchini and other squashes, eggplant, canteloupe and watermelon, pumpkins and…must be forgetting something. They have mostly sprouted, even the peppers and eggplant. Leeks are 2 inches tall already. In one of the raised beds I have green beans, yard-long beans and sunflowers, and those are all 1 to 2 inches high. Slugs have already been a concern, but chickies LOVE slugs, so one of my fun daily activities is slug-hunting to hand-feed to the girls. They love their slugs and go nuts when they see me coming. Slug Mama. Yep. My new nickname. 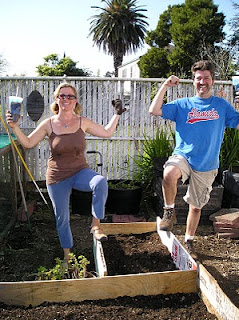 Ain’t we cute? What’s not to love? I need a shower…note yoga gear which also works well as garden gear. I also have a dandy base tan.
Next on the chore list:
Loving this simple life.