So what has occurred since last time I posted? The Tax Man. We’ll leave it at that.
Meanwhile, we spent the weekend digging up dirt (not on the neighbors, but for the garden). Planted more strawberries (8 new plants), and one new artichoke. Next spring will be crazy with plants. Will we still be here? At the current rate of attrition of children-leaving-the-nest, one wonders. We’ve been thinking about how long to stay in this dreamhouse as the nestlings fly away. A 5-BR house was perfect when we moved in in 2006. Now there is one empty bedroom, an office, and the other two girls make noises like they might go live their lives elsewhere. How many offices and sewing rooms can a family use? Thus, when we get down to one Boychild and two adults, we shall have to reconside the living space. The garden and chickens will come along or stay behind, and we’ll see when that day comes.

The tomatoes are in bloom, and I will not pinch any more blossoms to promote growth. I want some fresh tomatoes, dammit. Celery is lush; so are sage, parsley, oregano and even the straggly basil has perked up. Onions are green and prospering. Beets are popping up, as is the rocket (aka arugula). I planted a plotful of mustard greens, which I found growing rogue at an empty house last week. The mustard will feed the chickens or mix into salad greens, but solo, is too bitter for me, raw or cooked. The corn is doing nothing — not a single sprout yet, and it’s been at least 2 weeks, if not 3. All of the squashes/pumpkins/cukes are sprouting second and third sets of leaves, and I think, barring hailstorms and slug-hordes, they’ll all be fine. 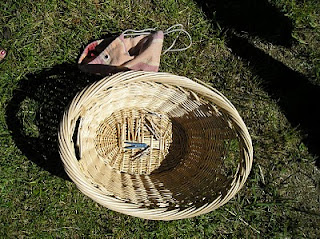 Just now I have pegged out a line of sheets and pajamas to dry. They are flapping in the breeze. Yesterday the cats got fed canned cat food twice (Mr,.Husband and then me, not knowing that anyone else would do the morning job). Today there is no canned food left, so I am cooking up a batch of cat food. They also have kibble, which they eat only as a snack. It isn’t real food to my fussy little stinkers.

Tasty Treat
Cat food = the carcass of a chicken plus an extra scoop of gizzards and hearts (on sale, frozen), stewed with carrot, some salmon oil and kelp (vitamin tablets), and later, a whole egg (shell, too) and a cupful of either oatmeal or brown rice. Cook together till the bones are mushy-soft, then puree in the blender with a scoopful of plain yogurt, cottage cheese or powdered milk. It is more nutritious (organic) than canned, and actually cheaper, with no recycling or trash (I reuse plastic tubs to refrigerate/freeze it). This batch will make the equivalent of about a month’s canned food (1/4 cup per day per cat). I could also add spinach or another mild green. I don’t have any spinach on hand, though. I don’t give them pork or beef as a rule, and I once tried cooking a fish variety but it was too nasty to cook a fish’s head for several hours. The bulging eyeballs made me ill. Plus, boiled fish = stinky house. So chicken is our only flavor. 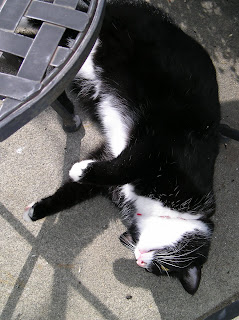 Note: The kids love the smell of this cat-food soup when they think it is our dinner. When I say it’s cat food, they gross out. It is the same stuff, either way, and just smells like chicken stock cooking — kinda chickeny with a little herb scent. It’s perfectly edible, without the bones or eggshells.

Speaking of chickens, but in a different way altogether — we finished raccoon-proofing the henhouse, and the girls slept in their coop last night for the first time. They got freaked out when night fell and were cheeping and crying for some time. They have never been outside at night. It was sad to listen to them, but I had to do the mommy thing and let them cry it out. Eventually they nestled down and shut up. And this morning, they are all safe. Yesterday Patrick spent most of the day drilling and sawing and screwing in hinges and locks. The new door, made of salvaged plywood and a piece of the Ikea dresser we cannabilized, features 2 locks and 2 hinges, with 2 carrabiner hooks to keep the locks closed. The hinges and hasps required a trip to the hardware store but we had the hooks already. Glad to have that task out of the way, and no longer have to shuttle the chicks back and forth to the garage at night, have 2 cages to clean, etc. I am very grateful for that reduction.

Today’s chorelist also includes ironing a few more shirts out of the mountain of ironing. Bills to pay. Clean off the dining room table, which has become my downstairs desk. Cookies? Maybe snickerdoodles. Dishes, some kind of dinner for 5, same as it ever was.

Feels like as good a time as any to say I am glad to be alive. Not a very exciting life, but a good one. Peace out, y’all.