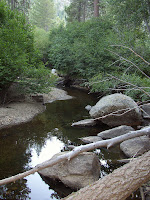 We just got back from a family vacation at a lovely cabin in the woods at Lake Tahoe (and, boy, are my arms tired). It was our honeymoon-slash-summer vacation-with-four-kids, and if that doesn’t make for real romance, I don’t know what does. (Here’s a photo of the Upper Truckee River that I took — looks peaceful, huh?)
This wasn’t our first vacation as a family, but it was our first since we became legal last month and starting sharing a last name, and it turned out to be the bonding experience I had been wishing for. And more.
There’s a name for families who say they enjoy being together – liars. We like to joke that we’re more like the Addams Family than the Brady Bunch, despite the blended family, the three daughters with hair of gold like their mother (though theirs is now dyed several shades of dark), and the youngest one in curls (she flat-irons it daily).
But truly, we did have fun together every single day. Within an hour of getting to the cabin, one of the girls drew a sign that read, “It’s OK – we’re on vacation,” and that became our motto for the week. When something spilled, someone didn’t want to participate or wanted to stay up late, we just said the magic words and it was fine. We had a couple of gorgeous days at the beach, roasted slowly in the sun to the perfect tan, and then the thunderclouds piled in. The lightning crashed, rain poured down and we found ourselves inside the cabin, in the high Sierras, just waiting for cannibalism to set in.
To jump the gun, so to speak, the Husband suggested we learn to play poker, and after a quick tutoring session, we divided the chips and were soon anteing up the requisite nickel for each hand.
The sturdy beechwood table was packed with the six of us players, practicing our poker faces, each of us with an appropriate poker name: Princess, Havana Jane, The Cold Fish, Funny Bone (who soon became known as The Bruiser after showing off some of his finer scars), The Petaluma Playah and the dealer himself, Jamaica Blue (it’s a kind of coffee, wiseguys).
OK, so the Petaluma Playah was me, and I didn’t name myself. And pretty soon my nickname became Petaluma Peroxide when I made a series of really dumb (read “blonde”) gaffes. Then it morphed to The Petaluma Mustache, after an incident involving a glass of milk and a little spillage. Then a bug crawled on my neck and I screamed (as only I can – ask the poor kids), and then it went down my shirt. I am now known as Bugsy, among other sobriquets.
Grandma is another name I picked up last week. We went out to breakfast at an outdoor café, and I ordered the bacon and eggs with sourdough toast – made from the incredibly delicious Truckee Sourdough bread. I was so full that I didn’t eat the toast, but I didn’t want to waste it. So I carefully wrapped it in a napkin and stuck it in my purse to eat later. What’s so wrong with that? You’d have thought I was eating endangered baby seals by the way I was so rudely abused all the way to the cabin.
The toast was so delicious, even six hours later and stone cold, that I ordered it again the next time, and, as luck would have it, didn’t eat it. So I wrapped it up again. What’s the big deal? And yet, they call me Grandma. Like that’s some kind of an insult?
I could go on, but you get the general drift. Whenever something came up or down, we found new names for each other, including renaming the entire family for the cast of Gilligan’s Island. (I’ll tell you straight up: we’re Mr. and Mrs. Thurston Howell III. Call me Lovey if you want to.)
We sat down for dinner our last night at the cabin and each of us began to describe in turn what we’d enjoyed most. When Jamaica Blue and I had our turn, we listed, “Coffee on the deck, cuddling, sunrises and sunsets on the mountains, long walks in the rain…”
The Princess added, “Piña coladas, walking on beaches…” and the Cold Fish chimed in, “You sound like a Match.com ad.”
Well, go figure. This is real romance.