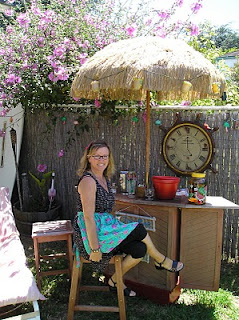 Did you ever see such a happy hostess? No? I didn’t think so. Speaking to you live from Party HQ, where the Father’s Day BBQ adventure is winding down. Well, it’s done, actually. All guests gone, all dishes washed, and all food accounted for. Well, there I am in my pink flamingo apron, clutching my bar stool for dear life as I wonder if there will be enough food or too much, and if people will come, chat, behave, and then leave before bedtime.

The answer to all of the above was, I’m glad to report, a resounding yes. Yes, folks came, had fun and left, and there was enough food, and also too much. People came bearing gifts, and duplicates. For example, we ended up with a lot of watermelon, tortilla chips and 3-bean salad. Really, we all got the 3-bean memo, because 3, if not 4 people, made a 3-bean salad (including me). 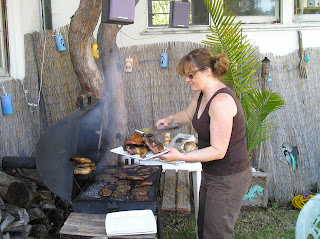 Here’s Annie, cooking the chicken and burgers. All the food tasted good, and there were also leftovers. My challenge this week will include how to incorporate cooked hamburgers, cooked chicken and a hell of a lot of 3-bean salad into the rotation — without hitting the grocery store at all. Tonight, we are having a cold salad bar, with several offerings, while they are still crisp and fresh.
I took a little inventory this morning, and this is how the food scene played out: No one ate hot dogs, so those went back into the freezer. So did most of the buns. I have a partial bag of hot dog buns out and one bag of hamburger buns, which I will use as sandwich bread and toast this week. I just don’t like how buns defrost. They seem stale no matter what we do (toasted or not). So I’d like to eat up some of them, and freeze the rest anyway. We ended up with a half a watermelon, two baskets of homegrown raspberries (gift from my mom and her garden), an extra bag of tortilla chips, some leftover beers, and a smidgen of a bottle of Rock Wall wine that sat outside all night and part of the sunny morning until I rescued it — I’ll taste it later, and if it’s not funky, it will go into a soup or sauce this week. Also on the score list: my mom donated a bag of flax seed, which will go into our oatmeal and baked goods. Plus, there was a half a bag of chow mien noodles that will end up in someone’s salad this week or next.
Hungry? Have a party… 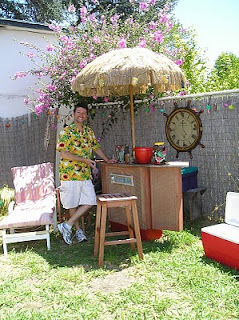 Look at that face! How could you not just *love* him!
The Key lime pie, requested as a Father’s Day treat, was super. It had called for 5 egg yolks, and trying to be mindful of using all the food we have on hand, I saved 5 egg yolks in a tupperware. Two egg whites went into the cookie dough that I made (but haven’t yet baked), and the other three egg whites are going to be my breakfast tomorrow. I also used limes for Key lime pie; I squeezed about half the limes, and then cut some for garnish. The rest of the limes were cut up for drink garnishes. The gleaned lemons we got a week or so back were still on hand. I cut those up and used them for drink garnishes, including in the 3 containers of lemonade I made and the gallon of sun tea. Any leftover lemons and limes (there are some left) will end up in tea or juice sometime this week. And that’s about all there is to know about the Father’s Day fiesta on food stamps.
Now, to keep from wasting all that food…stay tuned!
Food as metaphor
It’s often been said that food is a way to express love. I experienced food as love today. There was a slight misunderstanding about where the Boy was supposed to be. He was at a friend’s house overnight, didn’t call when he was supposed to, made plans with an unidentified friend without asking, and then left the overnight friend’s house with a phone that was not fully charged. In the space of about 10 minutes I had one of those little parental heart attacks where you don’t know where your kid is and because of the reliance on technology that is also often unreliable, he was unreachable. Not cool. I was able to get a hold of him pretty quickly, but in no man’s land for a few minutes there, I was freaking out.
When I got him on the phone, I sent him back to the original plan, and jumped in the car. (I try to drive just two days a week — but when your kid’s in trouble, or needs you — out goes the rule.) I kind of jumped on his case on the phone, and on the way over to pick him up, felt a little guilty and that perhaps I had worried for nothing. When I picked him up and all was explained, it seemed a good time for a treat to make amends. I hadn’t had lunch yet, since I had a morning meeting and then cleanup of the backyard disaster. The Boy is always hungry these days. At first I fantasized about Taco Bell (my bete noir), then went to the dollar menu at McDonald’s, since I could get him an item or two. By then, I was going to skip feeding myself til we got home.

To the parents who are wagging their hoary organic heads at me, get over yourself. When a 12 year old boy needs comfort, a sun-baked sprouted quinoa patty is not going to help. Some chicken nuggets might. I know my Boy, and what makes him happy. The drive-through at McDonald’s was the way we chose to cement our friendship again. Note that the Dollar Menu sucks, so we ended up with an appropriately named Happy Meal instead. $3.39 for a bagful of grease, unhappy cow and petroleum byproducts, but emotionally, we survived the afternoon encounter and have moved on. It wasn’t a healthy choice, but one meal won’t sink the boat, and I will argue that an occasional indulgence from parents — especially step-parents, who are truly neither fish nor fowl, if you can follow the extended metaphor — will not kill the child. Nor the budget.

Reminder again that food stamps do not buy fast food. The only thing that food stamps and fast food have in common is the letter F. And the word food, actually. Technically, his meal did not “come out” of the food stamp budget I’m using. In the grand scheme of things, I suspect that most parents (even those on food stamps! who, by the way, are not bad parents because they are using government help to feed those kids) occasionally buy a special food treat when the situation calls for it. Comments? Chime in below.
In other metaphorical use, in recent weeks, I’ve noticed food as politics in all of the rancor about who’s using “our tax dollars” to buy food — or cigarettes and beer — or drugs. (More on this in another post.) I’ve noticed food as snobbery, in the elitist “slow food” movement, whose aim seems to be lording it over the pathetic fools who take their poor children to McDonald’s for a treat. Food is comfort, as we all know, a substitute for therapy, friendship, relationship, sex, companionship, love. Food is fun — ever try to catch popcorn in your mouth? Paint your lips with a red jellybean? Put an orange slice in your mouth and pretend you have orange teeth? Put olives on your fingers? Yeah. Food is fun.
But it’s also power: Monsanto owns the rights to huge amounts of genetically modified seeds and requires that farmers buy said seeds each year, instead of allowing the farmer to keep his/her own genetically viable seeds to use again the next year. The soy industry gives a lot of money to PETA (People for the Ethical Treatment of Animals) each year to help promote the consumption of soy (another overabundant product in this country, no better for you than corn). Vegetarians and vegans, did you know that? Do you know how much soy you can safely eat before you men begin to grow breasts and feel the estrogen surge? And the corn lobby is huge and pervasive. Recognize that corn, corn fillers, and corn sweeteners are in EVERYTHING. Recognize that the food stamp program does not even exist to feed hungry people, but to help FARMERS get rid of excess products. That’s why the USDA runs it, not the social services. Do a little research. Open your eyes to what you are eating and how it got to your plate. Just because you see an ad in Martha Stewart or Oprah or Esquire or Spin does not make it cool. Just because some “celebrity” wrote a book about it does not equate to your own research. All it takes is a minute on Google to get started.
Most of all, what food is to every person on this planet — security. It’s survival. It is the only way we can live. And it is flat-out wrong for some people to have more and some people to have little or none. Come to your senses, obese, diabetic Americans. Put your fork down and wake up. Hunger exists. It hides its face, but that doesn’t mean it isn’t here.
—
Sunday Menu
Breakfast: Coffee. Patrick: toast and peanut butter. Julia: oatmeal.
Snack: Julia: yogurt, banana.
BBQ (1 to 9 p.m.): various barbecued meats, salads, watermelon, iced tea, lemonade, wine, beer, chocolate cheesecake, Key lime pie, toasted marshmallows.
Monday Menu
Breakfast: Patrick: oatmeal, hard boiled egg, grapefruit. Julia: early meeting (coffee, $3.65, shared sweet roll); Simone: breakfast bar.
Snack: Julia: banana
Lunch: Austin: Happy Meal ($3.30); Julia: cereal and milk, banana; Patrick/Simone: leftover lettuce, tomato, Chinese chicken salad. Ana: Hot Pocket?
Dinner: Salad smorgasbord! Three kinds of 3-bean salad, Tuscan tomato salad, marinated veggies, watermelon, bread.

3 Replies to “BBQ and the Beast”