Hi. It’s me. Been busy. Just wanted to poke my head in the back door and share what we’ve been doing. In a word, LOTS. 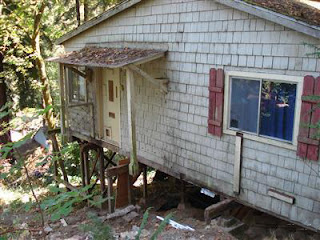 We are days away from making the offer on the pot house — the gutted, in-foreclosure dump in the West County (Sonoma) that was once a pot-growing house. We’ve been taking measurements, poking through floors and woodwork, calling the county, pacing off boundary lines, scraping together our cash (since it’s a cash-only deal), talking to neighbors, and thinking, thinking, thinking if we can really do it. We think we can.

We’ve been talking with family and friends who have the know-how. My dad has a barn full of stuff: 2 toilets, a bathtub, a sink (I’ll take those, thank you), a barn-sized pile of lumber that is solid redwood, including barn flooring (thank you, we’ll take that, too). My teen/YA daughters have boyfriends who need extra bucks and can swing a hammer. And we have a Boy (that’s free labor right there).
In short, we think it’s gonna be OK, and even though we’re buying a trash-heap, it isn’t toxic, there’s good water, it’s in a great location, and we’ll own it outright. If Mr Husband lost his job, we would be homeless by the end of the month when we couldn’t pay the rent. Once we own this property, as scary as it is, we could at least camp there. It would be something of our own. And it will be an excellent retirement plan for us — to own our own place, whether or not we have income. As long as the taxes are paid, we’ll be fine. That gives us HUGE peace of mind, despite the hard work ahead.

We’re already planning how to reuse and rescue materials. I’m gonna get paint from Freecycle as well as light fixtures, switch plates, outlets, etc. People always have this stuff sitting around in their garages. I plan to haul as much of it as we can get and make use of it. I’ve been checking out books from the library and compiling a “look book” of ideas and plans, like using a table topped with a marble slab as a baking station/counter in the kitchen. I’m willing to take a bet I can put that together for free/cheap, based on Freeycle and salvage. I’m a lifelong baker and a baking table like that would be heavenly!

I could go on but suffice it to say that it will mean changes in the short run — we will likely move out of our big house and into an apartment til The Boy finished high school so we can save on rent and put the extra toward renovations. But all worth it! Fingers crossed…

Don’t hate me but I’ve also been working on the Challenges set forth in January. Here are my updates on those:

1) Fat Ass Challenge. I’ve lost 1 pound. Purely accidental. I don’t know how. I haven’t tried very hard, but I haven’t had soda in almost 2 months so that might have helped. I did just start doing yoga in the mornings this week and am AMAZED at how much better I feel when I do it. And that’s free, btw — class is held in my bedroom before coffee. Later in the year, I imagine my hammer-swinging arm will get ripped.

2) Garden Produce/Tracking: In March I had almost $100 in eggs and produce (herbs, oranges) from our little farm (large suburban yard). The number of eggs has increased as the weather has improved and I am trading a lot of eggs — for citrus, ocean-caught fish (Pacific wild salmon steaks!), worm castings, coupons, etc. I’m sharing eggs now with people who have apricot and plum trees for later in the year trades. I found a kitchen scale in my late great-aunt’s kitchen and now it’s mine, and helping to track produce numbers.

3) Meal Planning: I have not been consistent over the past month, since my great-aunt passed away March 21, and I’ve been cleaning her home of STUFF. I also caught a horrific cold when she passed (coincidence? huh.) and have been fighting it for a month. That’s one way, I’ve noticed, that i deal with emotional stuff — i get sick. So those two things, plus the adventures in real estate, have made meal planning sketchy — BUT… we have not been eating fast food. We have been cobbling meals together rather than do take-out, which is in the plus column. I’m getting back on track on this item though.
4) Coupon savings: Have been very dedicated to this, and doing really well. I’m saving about 50% on everything we buy. Or rather, NOT SPENDING it. There’s no actual “savings” from this, but it leads directly into the next item…
5) $25K savings goal: We passed the $25K savings goal in March and are at about $35K right now. This is not a pile of cash, as mentioned before, but money we didn’t have to spend –> cost avoidance, paying off bills and not paying interest, etc. The items that pushed us over the top were receiving a second car (my late aunt’s) for $1, using Mr. Husband’s bonus to pay off 3 more debts and push a credit card debt down to a small balance, an continuing to add to savings, 529, 401K, emergency slush fund, chasing down rebates, getting every penny back through our Flexible Spending Account for unreimbursed medical, making donations in kind (with receipts), rolling coins…etc. Now I’m wondering if we will hit $50K for the year in cost avoidance/cash not spent. I must say that tracking these spending choices on an Excel spreadsheet helps a lot.
6) All Homemade and No Dryer — I’ve been really good about the Homemade Challenge — I haven’t bought anything that I could make myself. I’m really looking forward to exploding this challenge with the property, if the deal goes through. As for the No Dryer Challenge, I slipped a bit in the last month with three things — 1) I have been sick as a dog, 2) it has rained A LOT, and 3) I have been gone a lot to the West County (Sonoma) to work on my great-aunt’s house and look at property) — so being sick, bad weather and not being home = a dozen loads in the dryer, and I’ll just have to live with that.

That’s all for me for now — I’m reading all comments, just don’t always have the bandwidth to respond. Hope everyone had a wonderful Passover, a blessed Ostara, a holy Easter, a lovely spring and also Happy Earth Day today. And many more…