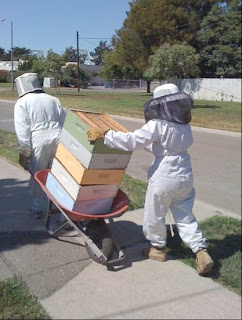 Following up to the other day’s post about the suckhole that we hoped would be ours — poo. We didn’t get the house after all. As these things happen, just as we were getting our offer ready, someone else put in a bid (this was after we’d been assured that no one else on the planet, nay, the very universe was interested…). Their bid was lower than ours was going to be — but it was accepted. So clearly, the Big Kahuna has something else in mind for us. I can’t say I’m amused by the whole roller coaster of the real estate market, with its last-minute nasty surprises. But what the hay? You win some crack houses, you lose some. But I’m not bitter. Much.
So I took all my library books on restoration and recycled buildings and energy-efficient chicken coops, et cetera et ad infinitum, back to the drop-chute and took out more books on WWII and the Holocaust, a more cheerful prospect at the moment. Seriously. I was doing research on my new novel before we fell into the House Frenzy a few weeks ago. And writing a novel is always more fun than not writing one.

Another post soon: I’m back on the blog wagon as a local spotlight on Alameda Patch (a little pinkie finger of the AOL-Huffington Post media empire). My posts will be more frequent and certainly more sterling than of late. I think I’ve recorded only triumphs and tragedies, without basic stuff that shows how the great machine works. (Wow — labored metaphors are just my thing today. No. I’m not bitter.)

I spent yesterday and today helping a friend with his beehives. The bees were mad as hell yesterday and really aggressive — so much that I dashed for the house two or three times. I got too freaked out being swarmed over.  See photo above — that’s me at the back and neighbor at the front, loading an empty hive into his garage. Today the whole hive took off en masse — which explains why they were so pissed off yesterday. They stopped in a local tree, but that wasn’t far enough away, so they took to the wind. Inside, I helped my pal spin honey out of the comb and we bottled up almost 20 pints — at about a pound and a half per jar. It was slow, sticky work, but I came home with a pint jar of fresh early spring honey and a beeswax candle made from an earlier batch. And it was very good.