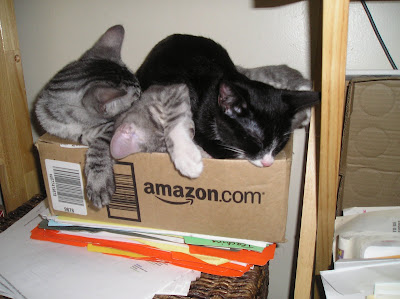 We got the kittenS (plural). Three of them. They think they own the place. In fact, they do own the place. This is what they look like right now, sleeping on top of a manuscript box in my office. On top of each other, as well. 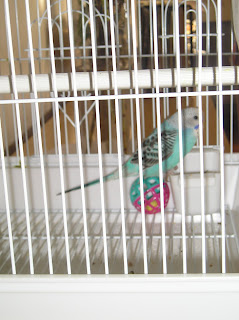 Because it was a buy one-get one free sale (seriously! They called it a “2 Fur” sale) at the shelter, I also got a budgie — a blue parakeet we named Jamaica. S/he was silent and woudn’t eat for the first 24 hours but now is fluttering around and chirping and eating and watching us from the corner of its eye. It’s just three months old, too, and we won’t be able to tell its gender for another three months, after molting. So I’m told. Jamaica is nice and asexual, and we feel downright tropical having a parakeet as blue as the Caribbean in our family room.

Next up? Reindeer.
Just kidding.