So it’s the last day for those of us doing the JFSC, and Mr. Husband and I will fast instead of eat, to think about those who run out of food stamps before the end of the month. I won’t put any restrictions on the kids — they can eat whatever (they’ve been good sports all along). At first I thought about the Catholic Church’s guidelines for fasting, which is half breakfast, half lunch, regular dinner. But that seems excessive/abundant, maybe, for the real FS participant. What we’re gonna go with is this:

This is a lot of leeway for free food, but I work at home, so unless I go cruise our industrial area for food in the Dumpsters, it’s unlikely I’d run across any. There is an event for the library at 2:30 with free refreshments, so I think I’ll go to that. I would have gone anyway. It just fits, luckily. And I have coupons. This (below) is what I have on hand. Don’t laugh. It’s ripe for a rude joke, isn’t it? Hmm — sit on the couch watching a movie, swigging from the hot sauce bottle, until I run to the bathroom in agony…. 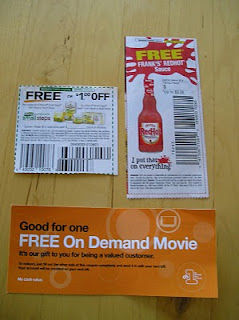 I had a bunch of Taco Bell freebie coupons but looks like the teenagers have absconded with them. There’s another set of the TB freebies in Mr. Husband’s car, but it’s locked and he has the key, and is this just G*d laughing at me or what?

Patrick will probably have lunch offered at work in a meeting, and his green tea. We’ll see at the end of the day. As for me, I’ve got a busy day. First, coffee on an empty stomach — mmm! I’m going out to weed the garden and see if there’s anything ripe. I look forward to a couple of cherry tomatoes and some herbs. Later today is that library event, which bodes well for cookies and punch. Then Top Ramen for dinner — we’ll share the package.

It’s not fasting in a religious or spa-cleanse way, but it’s how I imagine the last day of the month, with no food money for a hungry person. What is free to everyone or freely given — I can be open to that and will see what  happens.

Last note before I go about this blessed day — I fed the cats this morning and they turned up their little pink noses at the brand of canned food I gave them. This pissed me off inordinately. Being hungry hurts the stomach and makes one grumpy. The cats had better go catch a mouse, or two. I’m in no mood.