Sunday we were tootling along working in the yard, mowing, raking, painting, scrubbing, etc. It was hot, and then I said, in a wishful sort of way, “Man, I’d love a tall, ice cold Pepsi right now,” and then someone — it may have been me, or someone who looked just like me — said “Mmmmmm, Taco Bell,” and the others jumped aboard the train and….there I was driving across town to order Taco Bell for four of us. It set me back $25.
Fast food is not part of the FS budget because you can’t buy it with FS — but it does come out of our real budget. 25 bucks! Yeesh. And I had that pot of corn chowder already waiting for us for lunch. Doh!

I was mulling and feeling guilty over this vast breach of trust in the JFSC, and how was I going to break it to my blog readers, and meanwhile, my 19 y.o. daughter says she’s going to make dinner. I had a FS dinner planned but I was so tired after all that yardwork and guilt-tripping that I said go ahead. Ummmmmm….. yikes! 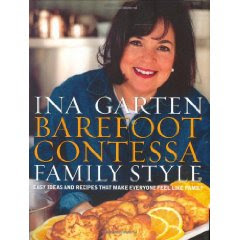 She had the Barefoot Contessa cookbook out (yes, that very one right there) and was creating a huge homemade macaroni and cheese with a lavish hand to the milk, cheese, pasta and fresh tomatoes. She had grated a mountain of cheese, filled a pot with a quart of milk, etc. She made a ginormous extravagant mac and cheese casserole because she wasn’t used to cooking and had no idea how big a 3-quart casserole dish was. I thought I was going to skip groceries this week because we had plenty of milk and cheese…ha ha. So while I was outside fretting over my descent into fast food hell vis a vis the JFSC, my daughter was inside, destroying our budget from within by cooking extra rich, huge casserole with ALL OUR CHEESE.
It wasn’t the fast food that killed us this week. It was the Barefoot Contessa and her womanly wiles. I guess the food stamp gods were having a little laugh at my expense. Ha. Ha.

As you can see below, however, the Taco Bell visit was by far the worse sin. And to be honest, it looks like a very real misstep on the food budget journey. When we’re short of funds later in the month, that instant decision may come back to haunt us.

Today, Tuesday, is my shopping day, so I’ll report back on how the budget is going, what we ate and will be eating on this week’s JFSC. And another rant I’ve been working on. Stay tuned.