I’ve been experimenting with cucumbers and zucchini all day, trying to figure out how to preserve the bounty of these tasty veggies — well, they’re really fruit — in different ways. Why? Because we eat only seasonal, locally grown produce. So when there are no cucumbers in my backyard and none at the farmers’ market, there are none on the table. So that means at least six months a year without cucumbers.

I love cucumbers. Cool, neither sweet nor sour, they are one of the most refreshing things I can think of to eat raw, out of hand like an apple, in a salad, with dip. Love them with rice wine vinegar and a sprinkle of sesame oil. Just a sprinkle of lemon-pepper is lovely. Or chile-lemon salt (look in the Mexican section at the grocery store — tasty stuff). Sour cream and dill make a creamy little cukey salad (learned that one from my mom). Or I can lay a few slices on my eyelids for a mini-spa treatment. One of my favorite salad dressings is cucumber dressing — no longer made commercially, but I used to buy it all the time and used it on everything from sandwiches to fish, as well as salads. Cucumbers rock da house. But (and this is a big but) — the fam doesn’t really like pickles. Only so many jars of pickles can I make. We still have last year’s stock, unfinished. And probably some from the year before. Disheartening, to say the least.

Zucchini I also enjoy, though with less enthusiasm than the crackin’ cuke. I have discovered how to freeze zucchini in many forms and thus it is not as big a challenge for me. Zucchini and other summer squashes are pretty easy to chop, blanch and freeze — grated, for baking, or sliced, for dinner veggies. And yet…what else can I do with these things?

I asked my friends on the Compact list about some different ways to preserve the bounty. Suggestions included dehydrating them. That sounds, frankly, disgusting. I’ve used the dehydrator to dry onions, celery and carrots before, to make soup mixes. And it makes the whole house stink of onions. Doesn’t exactly sound like the Glade fragrance of the week, does it?
Nevertheless and notwithstanding, I dehydrated some cucumber chips with the intention of rehydrating them later into salad dressings or sprinkled into salads directly. Will report back in about 6 months how that goes. The cucumbers did not stink. They smelled like nothing. They looked like green paper and crumbled right up. I used the thinnest setting on my mandoline to get the slim slices.
Also dehydrated some zucchini chips. I sprinkled these with garlic bread spices, and the house did smell garlic-bread-y all afternoon. I tasted one when they were dry and have been trying to get the garlic flavor out of my mouth for about 3 hours now (spits). Yuk. However, Mr. Husband cannot keep his mitts off the zucchini chips and they are half gone already. So it looks like this is a hit — a homemade healthy snack that is “free” (if you don’t count the effort of growing zucchini) — and not fried. And not wrapped in plastic. Treehuggers (like me) like that.

Onward: I made pickles last week and started wondering how the cucumbers would taste if there were no spices in the mix — that is, dill pickles without the dill? Wouldn’t they just be vinegar pickles? Cucumbers with a little vinegar taste? Could I use those in a salad? Especially if I’m just going to put salad dressing on them anyway? I don’t know. Maybe. So I gave it a whirl today — sliced up a batch of cucumbers and poured plain brine over them — no spices except for the salt. I made just one jar because a bunch of the cucumbers turned out to be spoiled — argh! The refrigerator got too cold and froze everything, then warmed up. Love the crappy old refrigerator that came with the rental…So the extra cukes for my experiments turned into chicken food, all mushy on the inside. Oh well.

Exhibit A. Here are one jar of “preserved cucumbers” and a partial jar of dehydrated cucumber flakes. I’d like to show you the zucchini chips but there are none left. Somebody Ate Them All Up. 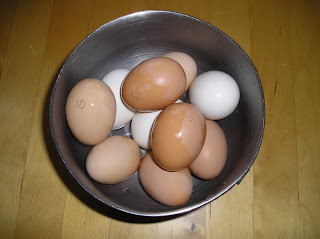 And that’s about all I have to say about cucumbers and zucchini. I do, however, have this gratuitous egg shot for you — fresh from the pot, these hardboiled eggs are on their way to the refrigerator and later will become breakfast of champions for Mr. Husband. Yes, the chickies each lay eggs of a different color, which is charming. We write the date on the shell so we know which are the oldest eggs, thus, which to eat sooner.
Today the chickens ran around on the lawn while we cleaned the coop. I gave a wheelbarrow full of chicken manure to my neighbor LaVera, thus fulfilling the belief that I like to give people sh*t. It’s true. You want some? Come get some. I used lots of the dirty straw to mulch and nourish the new rows of beans I just planted today — hoping for another round of green beans in the fall. This summer has truly been the coldest in a long time, and my stock of green tomatoes is not amusing. It’s a little worrisome, since I have plans to eat off my produce for the winter. Sun — shine, please! I also planted more beets and radishes, plus a row of spinach and a small planter of Swiss chard. Here’s hoping a tiny ray of sunshine will warm the garden so these babies can grow.
Happy week to you, my friends.

6 Replies to “playing with my food”