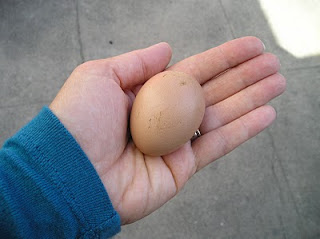 Busy days on my little city farm. The hens, bless their pointy little beaks, are laying, to the tune of about one egg a day on average. And the eggs are getting a little bigger each day. At least two hens are laying; you can see by their feet (thanks, Linda, for the tip), which go kind of grayish-silvery green in tone. I’ve caught two of the hens in the act, or crowing about it (heh) afterward, so cheers to Violet and Rosie. I’m sure Bluebell isn’t far behind. Poppy, however, is on my $&^#*! list.

Maybe she’s jealous. Maybe she’s horny. Maybe she has a Napoleonic complex. She hasn’t laid any eggs, and she isn’t the biggest, but she’s the boss-hen, and thinks it’s her duty to aggressively come forward and try to peck. However, she also turns around and “presents” to me, asking for some Big Rooster Love. Well, I am unable to offer that kind of commitment at this point, but I do pet her and talk nicely to her. The thanks I get? She attacked me yesterday, biting my arm in two places (drawing blood), flailing at me with her feet a la Ms. Cockfight of Alameda, and telling me what she thinks of me, foul human eggstealer.

I have one word to say to this saucy wench: Crockpot.

In other lil farm news, the veggies keep tumbling in. Here’s a recent handful of squash and cucumbers. 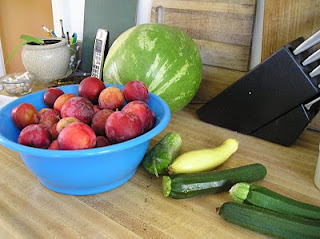 Next to the veg, there’s a big bowl of plums given to Mr. Husband at work (Thanks, Daniel!). We’ve been eating them and I put some in a smoothie yesterday. Tart and tasty! They’ll end up in a tart, in fact, if not a saucepot, soon. Behind that lurks a watermelon, locally grown but not at chez moi. Waiting for a really hot day to crack that baby open. 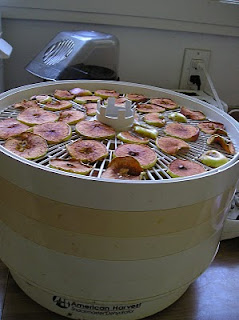 Here’s the next project on my daily chorelist: drying apples. A neighbor has three utterly neglected apple trees and all the apples are falling on the ground. I pick up windfalls and carry them home by the peck (which is a quarter of a bushel, in case you’re not down on your farm terminology). I pick up only the ones that have fallen outside the fence. I have about 20 pounds of apples in the other room waiting as we speak. And as fast as they come off the dryer (it takes about 10 hours to dry the slices), they go into certain children’s mouths. So onward in the preservation cycle we go. The kitchen smells so appley and warm when this dehydrator is going. By the way, the apples are brown because I did not add any preservative (lemon juice or ascorbic acid/Fruit Fresh) to keep them white this year. I have done so in the past, but thought I’d see if it made a difference this year. They taste the same. So I’m saving the step.

Here are two countertop farming projects I’ve got going. On the left is a jar of mung bean sprouts that I started on Sunday in anticipation of cooking Chinese omelettes later this week — gotta start eating more eggs, right? That is a plain old spaghetti sauce jar with a piece of window screen for fresh air. I rinse them once a day and Nature does the rest. On the right is a jar of Amish Friendship Bread batter (Thanks, Mary Lee!), which is a sourdough-type fermenting yeast batter that needs to be fed and then used or divided and shared. That lives on the countertop awaiting an infusion of bananas or zucchini for muffins and breakfast breads. (Note that no acreage is needed for these two projects.) I add a half a cup of flour, sugar and milk once a week and shake it to stir. No metal utinsels or bowls for this baby. They like glass, so my antique cookie jar works well, and I put a piece of waxed paper between the lid and the jar to keep the metal away. (<-- there I go, using my noggin again.) 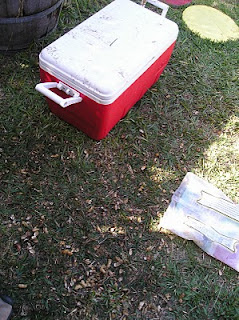 Meanwhile, back in the yard, the raccoons have come for a visit several nights in a row. One night they very actively dug to get into the chicken coop, and were foiled by our death-camp-style measures for the chickens’ protection. When we put in the coop, we pounded bamboo stakes and wire hangers into the ground, at least a foot. This was designed to keep anyone from tunneling in ( — or out — we’ve seen Chicken Run…). Those measures worked, because though the raccoons tried all the way around, they kept running into wire and bamboo stakes, and could not get through.

However, they had their revenge. We had a Tiki Party Saturday night for high school friends, and a marvelous time was had by all. We put most of the goodies away before retiring; however, we forgot about the peanuts. The raccoons ransacked the tiki bar and found the peanuts, tore open the bag and ate every last one. That was at least 2 pounds of peanuts, and the lawn is littered with shells. The bar and cooler were covered in muddy handprints, and my CSI sense tells me that it was a gang of short, striped hoodlums known to frequent this area by night.

Today’s to-dos include some foraging, sniffing out, ferreting and perhaps a bit of Googling, too. In the near future I will have plums and blackberries to preserve, rose hips to bottle and dry, all the produce from the garden to juggle, and chickens to coddle (if not their eggs).

Off to the salt mines, chaps.