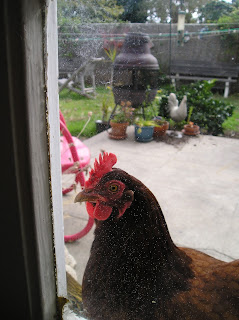 Today we have an urgent task ahead of us, which is raising the fence between the garden and rest of the yard. My hens have learned how to fly over and have torn up several vegetable beds in the past week or so. Really annoying, as I watched my English peas, baby collards, sprouting turnips and carrots get scratched into oblivion. I could trim the feathers on one wing of each hen, if I could catch them, but I can usually catch just two of the four (Poppy and Rosie like to be petted). The other ones (Violet, Bluebell) seem to loathe the touch of human hands and will really run fast. So the fence has to go up a few more feet. Then I can replant. But I’ve lost 3 weeks of warm sunshine, quite annoying. (The hen at the window there is Poppy — chief instigatrix.)

We had a very tasty tomato pasta sauce last night, half made with green tomatoes (I added a little sugar to make up the sweetness). Squirrels are running rampant in the yard, and pulling tomatoes off the vine before they’re ripe. I have rescued some of these vegies and threw them into the pot yesterday. I was calling it Stoplight Pasta Sauce, for the red, yellow and green tomatoes. I rather like that. Consider it trademarked.

There’s a small pile of cucumbers, zucchini and apples (thanks, Annie and Stew) on the counter, awaiting processing. I think I’ll shred the zucchini, pickle the cucumbers and dry the apples. I pulled out the last of the green beans, and was enjoying watching my fall crop of green beans come up, anticipating some fresh baby beans.

But in the last week we have had a visitor — a mole, who has eaten off the taproot of several sunflowers and half the luscious bean plants. It is like watching a disease spread — these beautiful healthy plants here, and then next to them, wilted, dying plants. Really sad. I put some mouse bait way down the hole and then covered it back up so that no one on the surface could get near it. The carnage seems to have stopped — I think. This tells me that the other boxes will need mesh/chicken wire put down before I plant anything else. 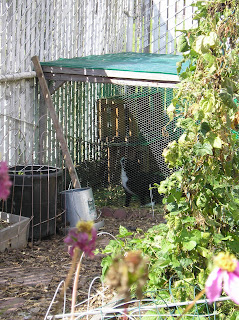 More life in the food chain – the other day I saw my cat playing with a mouse in the back yard (in the photo she is inside the coop, sniffing around). Not my favorite sight, but part of the circle of life, I know. But my cat is afraid of the chickens, who are pretty beastly. They don’t know that Fifi is Queen of all She surveys. I let the chickens run loose in the yard — as long as they stay out of the garden. Anyhoo, one of them scared Fifi away from her mouse, and then the blood-fest began. One hen grabbed the mouse and then there was a crazy free-for-all of grabbing the mouse from each other and tearing it apart. It was pretty grisly. I knew intellectually that chickens were good mousers, but seeing it with my own eyes — sheesh. I think I’d have preferred death by cat than death by chickens.

We’re getting 2-4 eggs a day and I am getting another hen in the next few weeks from a local gal; transitioning in a new hen will be interesting. The garden is still giving about 2 cups of yellow grape tomatoes per day, 1 zucchini, one small head of lettuce (enough for a day’s worth of sandwiches, or a salad if I save it up), and 3-4 medium to large tomatoes. I am ready to start freezing whole tomatoes; this year we were finishing the last frozen tomatoes in June, just as the new crops were getting ready to pop. I have beets, lettuce, peas (if they survive the chickens), beans (if they survive the mole), onions and peppers still growing, and also a few more spaghetti squash still on the vine. I have 3 spaghetti squashes in the house demanding attention — I will bake, then freeze the strands.
﻿

﻿
On the job front, I am now officially off disability after a year, and now just unemployed — or underemployed. I am picking up freelance work every week or so and can continue to build that up. Not sure exactly what is on the horizon, but it won’t be full time newspaper work. That hardly exists anymore and it is really poorly paid. Newspaper reporters were the lowest paid white collar workers in America, but now you can hardly find a full-timer around. Most papers have cut their staff, then rehired them as independent contractors, without benefits. It’s a terrible decline in the industry. That being said, I have no interest in chasing firetrucks and politicians anymore, either. So I’m back to reviewing theater (a terrific perk because I get to see live shows for free — usually 2 tix for me are free), writing short bits for regional magazines, and possibly doing some theatre PR. These things I can do from home and also tend my garden, flock and family (not in that order).

We are still enjoying our German exchange student, Fabienne, whose presence brings us great joy, and I signed us up for another student when this one leaves in January. I look forward to continuing that trend. One more person is no trouble at all, and she is eager to be here. That makes it very pleasant indeed.

Coupon Update
Coupon and grocery-wise, we are doing fabulously. I think I finally figured out the trick of coupons. I have a friend who gives me coupons — a 6-inch stack of them about once a month (thanks, Laurel!). This is interesting to sort through, because I have to wade through sometimes 3-year-old coupons, but the end result has been good. I am not one to buy crap food just because there is a coupon. I buy “whole” food — pasta, milk, cheese, etc. Occasionally canned food or a hair-care product (and only with a coupon!). And I NEVER buy cleaning products, scented candles, frozen dinners or Koolaid, which is what I see most often in cutting coupons.

My strategy is to read the sale papers of all 3 grocery stores (Safeway, Lucky and Nob Hill-Raley’s) plus CVS/Longs. I look for who has what on sale, and then I match that to the coupons I already have, sometimes multiples of coupons, and then I shop at 1-3 stores, using a detailed list and hardly ever deviating from it. My results are that I’m spending about $75 to $125 a week to feed 6 people, but I’m saving as much as 35-50% on what I buy. So I’m bringing home a crazy amount of fabulous food for what I’m spending — and “unaffordable” stuff like California-grown olive oil, good bread, organic chicken, nice cheeses, etc. Because we live on an island, about 6 miles x 1 mile, nothing is very far away, and I drive just one day a week. I do all my errands on one day and end up driving about 10-12 miles total. All the savings have been earning me 10 cents off at the pump at 2 stores, another really fabu savings.

More money stuff: By squeezing every penny and meticulously tracking all expenses, I have managed to get us in the best shape financially we’ve been, ever. Money is tight — but — we are on top of bills, paying off depressingly old stuff like back taxes and legal bills from our divorces (9 years ago! Ugh!). Within 3 months, I will have 3-4 more bills paid off and am refinancing my daughter’s school loans to make them more manageable. We are almost to the point where we can start reinvesting in Mr Husband’s 401K, which has a company match, and building up savings and The Boy’s college fund. Almost there. I can see it just down the road. That’s a nice place to be. Very nice, after several years of single parenting (both of us) and then catching up from those difficult days.

Other than that, I’m starting to consider keeping bees, and otherwise still writing and sewing and knitting and thinking about what’s next in the great adventure of life. Enjoy this blessed autumn (sniffs deeply and appreciatively at fall’s crisp air).

5 Replies to “of mice and moles”