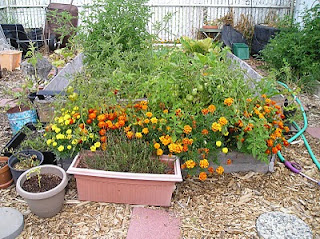 Just winding down from a mostly sunny and productive weekend. We started excavating our garden to make room for the chicken coop yesterday. We’ve had a very productive and successful garden for 3 years (see typical view, above) but with the addition of the chickies, we needed to rearrange things. Plus, the large container/box we’ve used for 3 years, made of plywood, is rotting away.

Note to prospective raised-garden folk: do not bother with plywood. Luckily, we never paid for any of the materials but had Dumpster-found them, so we’re sending them on to landfill much more shredded than it originally was. We’d burn it but plywood is not good to burn — chemicals, etc. So rotted plywood goes away. 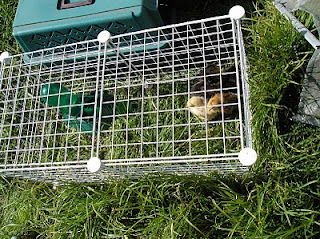 Since it was sunny, I put the chicks outside in a “playpen” enclosure near us (Bed Bath & Beyond mesh cubbies make a great temporary chicken playpen). They enjoyed fresh grass and worms (that we found in the garden dirt) for the first time. Yum!

We tore down some of the plywood sides and shoveled a mountain of dirt from this central raised bed over to one side of the yard, and moved all the smaller beds (which are rectangles of wood with no bottoms, so easy to move once you move the dirt out). These are leaning up against the fence in the other part of the yard. We enlisted some neighborhood teens to help move the coop. 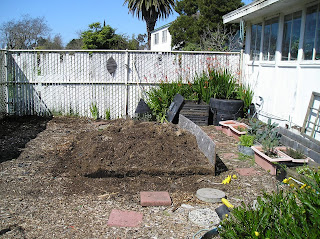 Our neighbors gave up on having chickens and gave us both the hen house and the wire coop. We were gonna take the henhouse, which is very cute (looks kinda like an Ozark outhouse with a moon cut in it, brightly painted), but it’s very solidly built and impossible to move w/o a crane and/or 10 strong (or drunk) people. So we have just the wire run. It is about 8 x 8 feet and will hold the chickens in safely and they can also be let out, depending on if we’re home or the weather is ok, etc. I plan to let them out as much as I can, but need to have a central holding space, obviously. Getting the neighbors’ coop was a score, I am very glad to give this old coop (in great shape) a new home (thanks, Erin and Jack!).
We have a plan to add plywood walls and a tarp for winter weather which will give them shelter. It rarely freezes here, though it can get chilly. We had 1-2 freezing nights all this winter. So I think the chickies will be fine in their new home. (Knock on wood.)  Below is the wire coop in its possible new location. 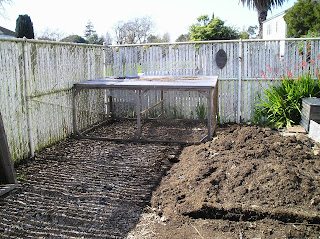 In between the garden excavation, I planted a couple of Early Girl tomatoes in a garden bed that wasn’t going to move, the earliest we’ve ever had tomatoes in the ground! I look forward to fresh tomatoes earlier than July now. Also planted many veg seeds in 6-paks and plastic pots that I had saved, using seeds I had saved myself or traded with my friends (you know who you are). We all ate lunch together in the sunny yard, sweaty and dirty, but it was our first outside meal of the year, and I think it was on summer vacation when we last all ate outside together.

In the meantime, I threw together an apple tart (no top crust) from apples that were losing their luster, made everyone eat leftovers (vegetable soup), and planned this week’s meals based on what needs to be eaten soon. We had carrots and chard from the garden yesterday — pulling up these veggies as we emptied their beds. Tonight I made “clean out the freezer surprise” (mmmmm) and my stepdaughter came to dinner (all is well). She is watching TV with the rest of the fam now and then will be on her way. After dinner I made a quick run to pick up a box of fabric for quilts from Freecycle. I won’t tell you about how the box was heavier than it looked, I tore my fingernail badly and fell down the step. Perhaps not wearing slippers out in public would be a good idea. No, I’m fine. Really. Can I have a bandaid?