Every day should be Earth Day. Check us out…(captions below) 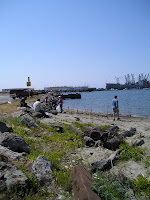 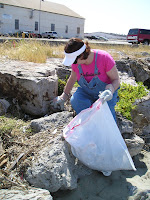 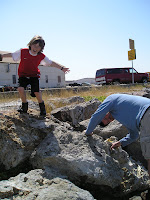 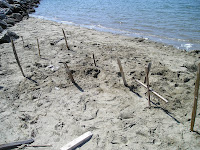 Who’s who?
1. Wide view of the tiny beach, with our “ready Fleet” far behind us. Also the USS Hornet aircraft carrier behind us (from which Apollos were rescued and the Doolittle Raid took off).

2. Close-up of the plastic stuff embedded in the driftwood. It was a big fat sifting job that ended when the wind blew it back into our eyes.

3. Linda Tubbs, whose husband is a Coast Guard intelligence guy, lives in our neighborhood, and her hubby got the tides right for us (or told us — he can’t actually change the tides…)

4. Eric K (my biz partner) and Peter, Carrie’s husband, sorting/sifting junk from between the boulders.

6. Fabulous self in grubby gear (note rubber boots — for wading after plastic in the lagoon) (note spectacular SF skyline behind me. We hardly notice it anymore…).

7. Max Tubbs, doing same as everyone else.

8. The Boy and the Husband, being cool.

9. The Boy’s job was to bury all the dead birds we found — a total of 12. He gave them all burials and a few solemn words. And a marker. Not sure what happens when the tide comes in — they go back to God…this is the dead bird graveyard.

10. A pile of the junk we hauled out — tons of plastic, plywood, an old mattress (which weighed more than 4 men could carry — they had to tear it apart to move it. Turns out it was full of wet sand, ugh). The yellow thing had a logo from an environmental firm — a boom for containing oil in the Cosco Busan spill we had last fall.

Boy, are my wings tired…

Mr Husband organized this neighborhood beach cleanup about a half mile from our house. You can see lots of abandoned buildings around us. About eight of us got our gloves and boots on and picked up a bajillion bits of plastic from this tiny beach-head. This is known as the Seaplane Lagoon, where sea planes formerly landed. It also has a nickname, as mentioned before: the Navy’s Toilet. The wind coming across the Bay was vicious, blowing increasingly from nothing to about 30 mph, and while it started out warmish, ended up very cold.

We gathered about a Dumpster full of stuff, but had no Dumpster. We brought it all home and are gonna run to the dump later in the week. We are SOOOOOO tired right now.

Notable Quotes from the day:

Linda: “Wow, I’m really gonna have to think about taking Tupperware from now on. Plastic is so evil!”

Peter: “I’ve decided to look for primary colors. Anything red, yellow, blue or green should not be on this beach.”

It’s all true. Plastic is evil. Try taking Tupperware, or wrap your sandwich in a dishtowel. If you had any inkling of how much plastic we picked up, you would stop using it at all.

Toothbrush, one child’s slipper, one disposable flip-flop from a nail parlor (for after pedicure), yellow army guy with no head pushing a wheelbarrow — he became our mascot for the day (he was about 2 inches tall — not a real Army guy with no head); comb; a daisy barrette, and a Hello Kitty barrette; one ear plug; a hard hat; a perfectly usable scrubby sponge; plastic flower pot; many returnable bottles worth money; lots of plastic rope; a float for a fishing net or boat.

What else? Hardly any glass. Way too much styrofoam, packing peanuts, tampon applicators, cigar mouthpieces (plastic), and fishing net. And way too many bottle caps, pens, lighters, straws and 6-pack rings. I thought we knew better than that.

For what it’s worth, none of the birds had plastic rings around their necks. That may not be what killed them.

(rant alert…)
But for heaven’s sake, people. Throw your garbage in the garbage, and recycle as much as you can. Stop using disposable products. There is no such thing as “away” when you throw something “away.” It goes somewhere. Use paper over plastic, and use reusable (even feminine products can be reused if you buy the right sort). Use matches, not a lighter. Take a fork, then take it home and wash it. Switch to cloth over paper, and start line-drying. Stop taking the ketchup and hot sauce packets from your fast food pitstops; you already have enough. You must. I know we do. Take what you need. Or stop going at all. Haven’t you seen Supersize Me? That stuff will kill you.

Start saving and get clean and green. If you haven’t done a beach cleanup lately, get out there and do it. If the ocean is the planet’s lungs, friends, we are in very serious trouble. We’re killing ourselves. It just isn’t OK anymore.

Rant over. Go kiss your kids.