We (Modern Muse) went live this week on Alameda Patch, a local online “newspaper” that is part of the much larger AOL-Huffington Post media family. Doesn’t family sound so cozy? It’s a business — what can I say? — to which I contribute mostly voluntarily, and occasionally on a paying basis.

Mostly I just wanted to let ya know that I’m cross-posting and you’ll see the same posts on Alameda Patch as Green Scene, although I will also post on non-green stuff here as well. Clear as mud? Yeah!

In the meantime, today I’m doing about 6 things at once. Some guys from the rental company came to fix the bathroom wall where the roof had leaked behind the tiles and turned all the grout rust-colored. They just finished. I wanted to look busy while they were here, because who wants the hired help of your landlord to think that you are lazy? So I vacuumed. I know — call the press! And washed all the bathroom rugs and shower curtain because they had to get moved anyway for the painting guys. I wore my apron all morning. I am wearing it still. See? [twirls] 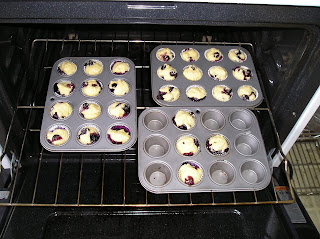 I had some lemons and blueberries and the lemons were looking a little sad, so it was time to make blueberry muffins. Ding! Just heard the timer… Mini-muffins are fun to eat. I don’t usually make them mini-size, but then I discovered some mini-muffin papers that I must have bought? some time? for the holidays, maybe? These are a good clean-out-the-fridge food — I used up the two sad half-lemons, the rest of the package of blueberries (they were a BOGO), and I also used a half cup of plain yogurt in place of some of the milk, to finish that up. They smell good.

Although my Plastic Purge doesn’t start until June 1, I am looking at my house and life with new eyes. Through plastic lenses, maybe. I started a mental list that will soon have to jump to paper or pixels as it grows and grows — what I buy or use now that includes plastic, and what will change in the future. I can’t wait for the challenge to begin. I’m ready now. Alas for such things as calendars and commitments. Let’s see if I can keep my mojo going for 30 whole days. 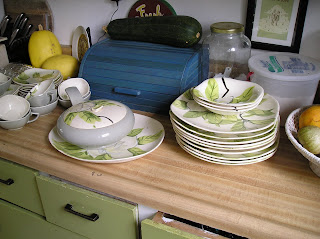 Yesterday I planted the rest of my garden, mostly squashes: watermelon, yellow zucchini, cabocha, white and orange pumpkins (2 types), Texas orange squash, acorn, and spaghetti squash. Looks like a squashy summer ahead. We finally ate the last ginormous zucchini of 2010 last night for dinner. It was huge. I mean — huge. (See photo of dishes, where giant zucchini rests on the bread box like a lizard on a rock.) The rind was thick so I cut it off, then steamed and served with olive oil and Tuscan herbs. It was — OK. Not great. Sauce or butter or I don’t know, something would have helped. It was just a little blah.

Too bad. The chickens liked it this morning, though. Ta-da. No waste.