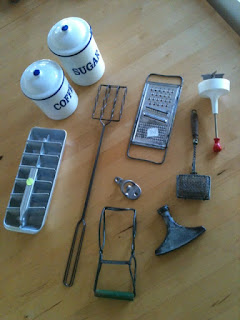 I spent Sunday meandering around the ginormous antiques fair in Alameda and Monday I did research at several local thrift stores. In all of my travels, I looked at how much plastic is discarded and reused, as well as what alternatives there are for non-plastic use in the home. The items in the photo are some of my finds. I’ll name them, clockwise: ice tray, canisters, cheese grater, nut chopper with new red handle, soap-chip swisher, lawn sprinkler head, jar grabber and fireplace bread toaster. The item in the center is a wall-mounted bottle opener (obviously not mounted anywhere yet). As I start to weed out some of the plastics in our house that may actually be harming us (Teflon, for example), I have been looking out for non-plastic items that would work just as well.
The nut chopper has a plastic top that broke when someone dropped it, but instead of discarding it, I found a new handle, a wooden one for 10 cents, as I mentioned the other day. This way, I can keep using the nut chopper as long as no one else drops it. If they do, I’ll then see about replacing the plastic lid with a metal one, so I can keep chopping nuts the old fashioned way (no electricity).
I don’t expect to use the bread toaster so much, except when camping or cooking out, but it’s nice to have non-electric options. The sprinkler head is brass and will probably work for another 50 years. The canisters are enameled tin and will work as well as Tupperware for keeping my baking ingredients dry and tasty. My favorite item, however, is the soap-chip implement. 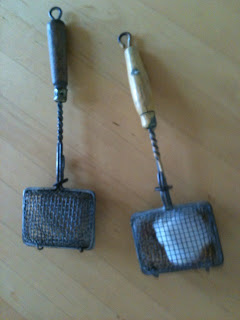 The other day LisaPie asked what I do about the impossible issue of plastic bottles of dishwashing soap. Well, here’s your answer, LisaPie! I’ve had the swisher on the right (with soap chips) for a year or so. They cost just a few dollars at thrift stores or flea markets, and if you see one, get it! You put your leftover soap chips and slivers inside the little cage and then swish it in water. This makes soap suds for washing dishes or fine washables. It also uses up those pesky little soap chips (unless you use them already to make homemade laundry detergent or liquid hand soap). There’s no plastic involved in this handy instrument; it’s a wooden handle and metal cage. I use it in a sinkful of water, then set it in the silverware drainer to drip dry.
If you can’t find one in your antique shop (I paid $4), try using the plastic netting that your onions come in. Put the soap chips into the netting and tie a knot. Voila — you have dish soap! That netting will last you quite some time. (Onion netting is also a great kitchen scrubber. I sew mine into squares but just tie it into knots and start scrubbing. They *never* wear out.) Yes, the onion netting is plastic, but since you’re reusing it (forever), you are not wasting the effort of making it, etc. It’s a reuse that also avoids further need for plastic-manufacturing, transport, packaging, etc.

That’s how it’s done…(dusts off hands).

What I noticed about plastics at the antiques fair is that there *aren’t* a lot of old plastic things that are useful. Most of what I saw seems to be kitschy stuff like toys or decor that people have saved but not worn out. In other words, not really useful but more fun or decorative items. Another way to consider this is that perhaps plastics don’t hold up under heavy daily wear. I notice that plastic food storage as well as bags get sticky-feeling after a few washes, and then the bags start feeling too gross to reuse. The sticky Tupperware takes a while to get really grody, but when it gets there, who wants to use it? At that point, it;s not going to become an antique. It’s going to get recycled — or very likely just thrown away.

In my thrift store travels, I was happy to find lots of cast iron and simple stainless steel kitchen items. I got a cookie sheet to replace my Teflon ones — the Teflon pans will go into the garden or garage for non-food use. They make great art trays, by the way, keeping beads and such from rolling off the table, if you’re replacing your cookie sheets. I also found several glass containers to use instead of Tuppers for storing food items like rice, nuts, raisins, and so on. I bought metal shower curtain hooks, a wooden Lazy Susan, a couple of baskets and wooden boxes for storage, heavy pressed paper placemats (British-style pub placemats), and a really ugly ceramic tape dispenser (it has a sailboat on it and is so ugly that I can’t bear to show it to you — but… no more Scotch tape dispensers). Since I was thrifting, I don’t think I spent more than a dollar or two on each item, and because they are used, that fits my Compact pledge (the buy-no-new stuff group to which I’ve belonged for four years now). On the other hand, there were lots of cheap plastic toys and tons of polyester clothing, all of which smells bad (polyester traps body odor and then releases it when warm, yuk).

It feels like all I’m doing is shopping and talking about shopping — my point is to show that it’s not expensive to replace harmful items in your home, and I will be able to donate or recycle the plastics I have now and wish to replace. Getting rid of plastics is not an elitist thing. I’m not trying to make people buy stuff — rather, the greenest option is almost always to buy nothing at all! Ordinarily I wouldn’t be out shopping anyway, since mass consumption is not good for my budget or the planet. But as part of the project, I think it’s important to show readers that there are other ways, and that you have choices, and those choices can avoid plastic if that’s what you choose to do.

Last item for the day: another scourge upon the earth…Mylar. 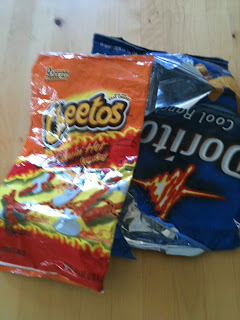 I honestly don’t know what to do with these. They are not even plastic. I can’t recycle them. I was thinking that I;d save and reuse them for gift wrap, but at some point they will be too torn to reuse. Eventually, these will go to landfill. I don’t buy these anymore. My kids sometimes do, and I can’t stop them from every bringing a Mylar bag to the house again. When I start to think about how many billions of bags of chips are eaten in a day, a week, a year, I start to feel like Carl Sagan talking about the universe…”Billions and billions….” It makes me feel sick to think of how much trash is generated by the 5-minute eating of grease and fat and salt that constitutes these snacks.

I can say “no more plastics.” I can refuse to buy these things. But lots of people do, and that’s not likely to stop soon. I know there’s a plan by Terracycle to recycle these, if your school or company chooses to participate. None of my kids’ schools are participating. Terracycle doesn’t accept individual bags. I really don’t want to make a purse or a bracelet out of this stuff. So I’m just offering these if anyone wants them. You want my garbage? I’ll pay the postage.

In 14 days, I’ve grown the point where these really make me feel ill and depressed, knowing how long they’ll sit in landfill. Sigh.