Skip to content
I had a very successful adventure in Portland, OR, the last week of March. I went with the sort of nebulous idea of “research,” thinking I’d spend a lot of time in the Multnomah County Library, and I did, and I learned a lot of great information. But that’s not all. Here are some of the exciting things that took place last week: 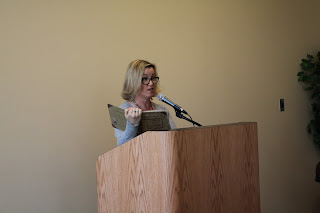 1. I went to Reed College, which is Doris’s alma mater, and gave a lengthy and detailed presentation to the Foster-Scholtz Club (an alumni group) about Doris’s four years there. It was a terrific group of people who were so interested that honestly, you could have heard a pin drop. So engaged and fascinated — a very different audience than the high school students to whom I have been presenting lately. I also donated the first set of diaries to the Reed College library, and saw the archives where they will be kept: humidity-free, acid-free, fire-safe. So much better than my desk drawer… We toured the campus and spoke to the registrar about possibly getting Doris’s school records sometime in the future. A beautiful campus, indeed. Especially with spring blossoms and tulips everywhere. 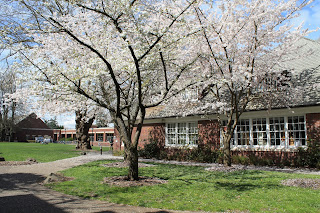 2.  I connected with the kind people at the Oregon Historical Society, and they welcomed me in. I took along some old photo albums and shared those; I left one behind to be fully scanned and added to the library there (I will retrieve it in September when I return). 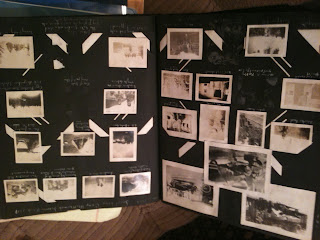 3. I spent time with the Architectural Heritage Center in Portland. Val Ballestrom opened the center’s files on L.R. Bailey (Doris’s father, the architect), and gave me copies of all they had. Unfortunately, this wasn’t much — but I had some good finds and shared those. The secondary project of creating a book dedicated to the legacy of Doris’s father, Luther R. Bailey, is off to a good start.
4. I visited with Doug Whyte at the restored Hollywood Theater on Sandy Boulevard — the one which opened in 1926 and Doris passed by, admiring the lights and the throngs of people. 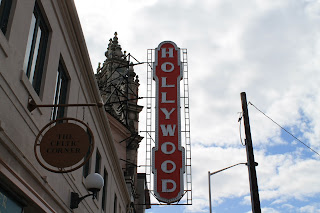 I will be launching volume two, Reaching for the Moon: More Diaries of a Roaring Twenties Teen, in September at the Hollywood, with a special 1920s movie night. Were thinking Champagne and Hollywood glam costumes from the 1920s. If you’re in Portland or environs, put September 25 on your calendar now. 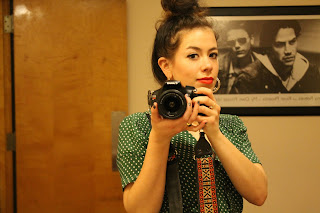 5. Daughter Mia, who was my personal assistant and photographer, and I went to tea at the Heathman Hotel and wandered around Broadway and other downtown areas, snapping photos of places Doris mentioned in her diaries. We also rented a car one day and drove up to see the house on Culpepper Terrace, the house on The Alameda, and the house on NE 23rd Avenue, where Doris lived in all her years in Portland. We took a road trip to Salem to meet with Facebook friend Heather Ryan, who is a member of the Oregon Writers’ Collective, and stopped in Oak Grove to see the house where Doris’s best friend Marjie Dana lived. The Dana house in Oak Grove is on the National Historic Registry now, as Marjie’s father, Marshall Dana, was the editor of the Oregonian newspaper for many years and very well known in Portland and local area.
6. I was interviewed by news radio KXL by Lacey Evans, a charming woman who had read the diaries and enjoyed them in I’ve Got Some Lovin’ to Do. The short interview (just a few minutes long) ran twice, and I will attach the mp3 if I can make the technology behave. (fingers crossed) 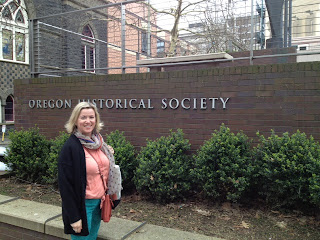 7. I had a meetup with a handful of Doris fans at the Laughing Planet Cafe in NW Portland, and that was a nice chance to relax and chat with people who are new to Doris and her adventures as well as people who have been following her for a while now. Thanks for coming out, friends!
It’s hard to believe I have been curating these diaries for less than two years, but it’s true. In fact, it’s not until September that I really hit the anniversary marker. March is a good but sad month, because it’s Doris’s birthday (March 11) but also the month in which she died (March 21), and because it’s also Women’s History Month, I feel like that’s a great way to remember Doris and honor her legacy. I hope, yes, I fervently hope that she knows this and is glad. 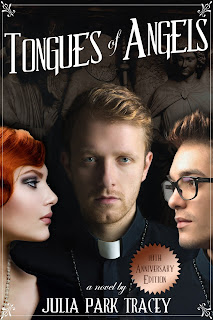 In April: The new Doris Diaries web site will come online (a few months behind, oops!), and I am relaunching Tongues of Angels, the novel first published 10 years ago.  Lots more blogging to come — and I will be interviewing two of my sister authors later this month about their new works. Come back and say hi, will ya?
See you in the cloud.