~My dear husband did some fixing of the plastic garbage can that the squirrels chewed, and did it in a most manly way that involved power tools and bleeding. He drilled holes, added lots of reinforcing metal and duct tape, and managed to slice open two fingers on the sharp metal edges. No stitches (I thought he needed them, but no, he preferred my home doctoring). I wonder if the smell of blood will keep the squirrels away? So far so good, three days later.

~Said squirrels are getting aggressive. Peanut addicts! They are resorting to threats and intimidation for their nuts. One nipped Patrick’s bare toe the other day (no blood) and another attacked my foot, scratching me and drawing blood (just a teeny bit). My patience is at an end. No more Mrs. Nice Peanut Lady. And btw, tree squirrels do not have rabies. They can get it, as can humans, but the instances are very rare. I do not have rabies. I just naturally froth at the mouth and fear water.

~We had hot weather — three days of glorious heat that soared into the 90s and maybe hit 100, but I can’t find our thermometer that used to hang outside. Probably stolen by a squirrel. The veggies have run riot. Finally getting a supply of tomatoes, more than the occasional red or yellow one. Big canning days to come.

~I think we are getting a German exchange student, and if so, she is arriving this very weekend, and that means I have to empty a room that was my office/art room and find a bed, and move all that stuff elsewhere, and then clean the house so it doesn’t look like all Americans are slobs. Which we are not. We just (still) have a lot of stuff from two houses smashed into one, and I have been ill and recovering so stuff doesn’t get put away, and also laundry has overtaken the living room, and one of these days I’m gonna mop, I swear. I think I may be putting too much pressure on myself. We’re American, dammit, and We Have Stuff Everywhere. [sings Glory Hallelujah] [tear trickles slowly down face]

OK, so the bedroom formerly known as my office that I never use (left) will be adorable when I finish, but it’s junk central just now. Yes, it’s embarrassing. But I haven’t been working, so it became a storeroom of sorts. Crappity crap. Well, that will make my Friday a busy one. The living room (right): laundry. Yep. Gotta fold and sort and get it out of sight. Uh huh. Gonna get right on that. [heaves big sigh] 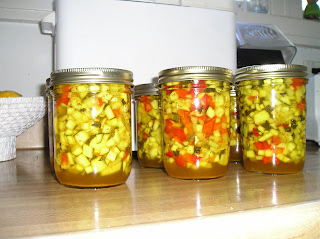 Meanwhile, back in the kitchen, I had to deal with the zucchini that is piling up in the fridge. Today I made a zucchini relish recipe from an email friend that used up three of my ginormous mankiller-sized zucchinis, plus some red sweet peppers and onions from the farmers’ market. Turmeric and celery seed, plus white vinegar and sugar — 15 minutes to simmer, then 20 minutes in the water bath. Result: 6 pints of zucchini relish that is so freaking tasty, I regret having just the pickings in the empty pot to nibble. I will definitely make more of this. It is more like a fresh salad than pickle relish. Really delicious — sweet and tangy. Yum.
And after that, or actually as it was simmering, I shredded another zucchini (2 cups shredded) and made zucchini chocolate cake. I switched up the white flour for whole wheat, and ended up making a sheet cake instead of a Bundt or muffins, and skipped the frosting. But the nutritional value is way up there. I am not even joking. Vegetables and fiber. And fair trade chocolate. This cake may not last the day. Here it is, in the oven: 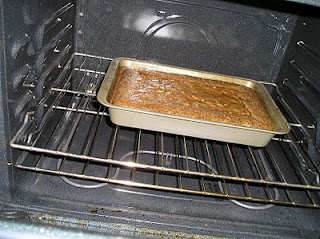 It is a crazy-early hour for me to be writing, but a certain daughter was banging around at about 2 a.m., probably rearranging her room. Because 2 a.m. is a great time for rearranging furniture, don’t you think? After asking her to stop, and getting up three more times to turn off the hall light which kept getting turned back on then forgotten by someone who was no longer restyling her room but clearly had other important business to manage, I finally got out of bed for real. And good morning, America, it is almost 5 a.m. and I have a deadline. Or two. Today. Extended from Monday, and no, I am not done writing yet, and I have a busy day ahead. Especially if I am getting a new teen-aged daughter on Saturday for five months.
Tell me again — what was I thinking?