Skip to content
Oops — has it been a month? I have been snapping pix and doing stuff and keep planning to blog about it, and then — well, here I am on the road to hell. So here’s what’s been happening on the Little City Farm…
Our exchange student, Fabi, joined us about a month ago, and that meant emptying my office/studio and turning it into to a bedroom suitable for a teen girl. Which meant that all that stuff ended up on our bedroom floor. So we tripped over it as I slowly went through it, Freecycled, recycled, dumped, reassigned, sorted and filed. A month later, our bedroom is livable again, and I have reset my office into the corner of the dining room, where I am able to keep an eye on the chickens in the yard, hear the doorbell and telephone, the timer on the stove, pots boiling, etc. It really is a better place, but fiddle-dee-dee, it took some doing. Which is why Radio Julia went silent for a while. 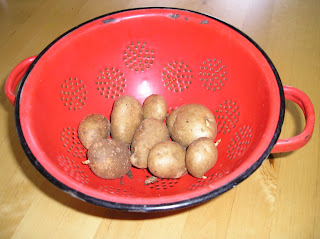 Here’s my potato crop. Yes. A year’s worth of potatoes. It’s rather cute, isn’t it?  I like the idea of making a meal from these and other vegetable produce, one complete meal from our yard. A tiny taste of self-reliance. 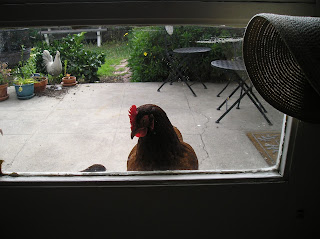 Here’s Poppy, looking in the dining room window at The People indoors. It’s like a zoo for the chickens. Sometimes all four gals get on the top step and look in. I feel so exposed… 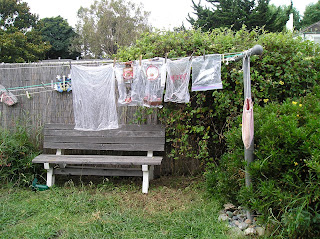 Yes. I washed my plastic bags. Yes, I did. And so should you. 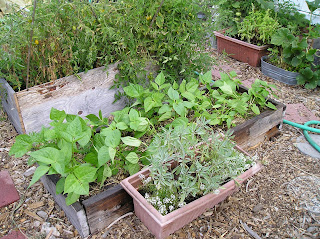 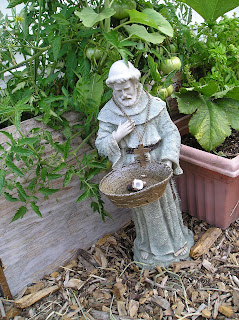 St. Francis was attacked and beaten up by raccoons. They chipped the bird right off his shoulder (it’s in his dish). They have done this before, but didn’t break anything. They often take his bling — the cross ends up elsewhere inthe yard. What a bunch of thugs. 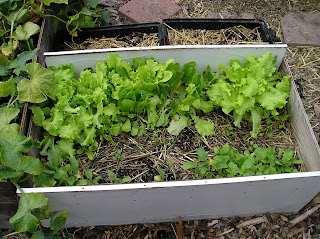 Lettuce! Radishes! Salad in a box that used to be a dresser! 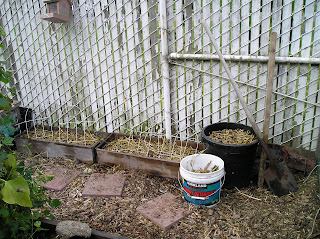 I planted peas in the low planters to grow in cooler fall weather, though we’re in the midst of an Indian summer heat wave just now. They popped up fast and are now 5 inches tall (but not in this photo). 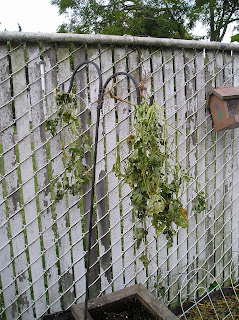 These are summer’s beans, drying in their pods for seed for next year. Saves me money, and I like being in charge of my future garden. 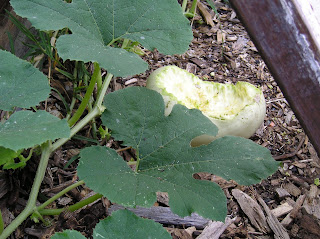 A spaghetti squash, which the neighborhood squirrels decided to taste. I left it there so they would leave the other squashes alone. As if. 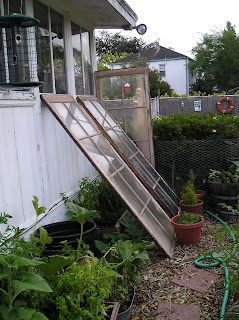 Here’s the greenhouse-sort of thing we made, with peppers inside doing beautifully, and the spaghetti squash vine growing into it. 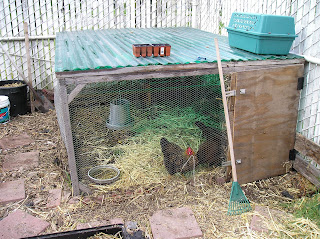 Chickens! “Let us out!” I have seedlings in the six-packs on the roof — cabbage and broccoli sprouts. 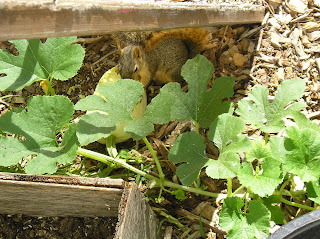 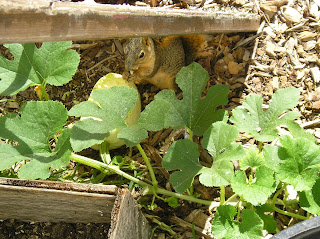 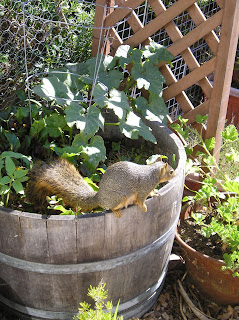 “I don’t like beets. I prefer squash. And birdseed.” 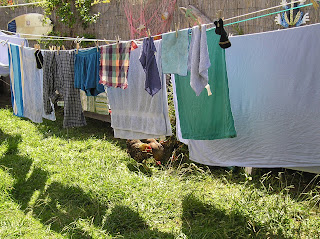 Laundry blues. Note the lone sock. No idea how it ended up abandoned. One of life’s little mysteries…
Yep. So that’s what’s going on around here. Loving the fall/Indian summer weather, still picking tomatoes, cukes, zucchini, squash and beans. Still getting tree eggs a dy from the chickens (I guess they take turns having a day off). I’ve been writing for publication recently, including Alameda Patch, the East Bay Monthly and Alameda Magazine. Will post links when they get published.

4 Replies to “return of the blog”