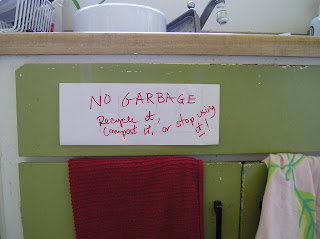 More so than usual, I mean. And why? Because the Plastic Purge has begun. Today, June 1, 2011, I am going to do what I can for 30 days (and then into infinity) to eradicate the use of plastic in our lives. (cue Mission Impossible theme song…)

I just posted this groovy sign in the kitchen. I have removed the trash can from the house. No garbage in the kitchen. See, as a green zealot, I’m always going through the trash because someone inevitably puts something compostable in the garbage (this afternoon — paper napkins, a pair of wooden chopsticks). And this after browbeating my family for at least four years. I frequently find recyclables (plastic, paper or foil) in the trash. And then there is the completely reusable plastic fork I pulled out this afternoon, too. I used to cringe when my former MIL, an Old Country-Portuguese, raised in the Depression years, babushka-type, went through the trash picking things out. Word: I have become that woman. (slays self with plastic knife)

So Step 1, for those of you playing along with the home game, is to eliminate the source of confusion, forcing other family members to actually Sort Their Trash.

Step 2: Call the garbage company, also known as Alameda County Industries around these parts, and tell them in my nicest telephone voice that we will no longer be needing a 40-gallon gray can for garbage. We would like to have a 20-gallon can, please. And the lady said, “You go, girl,” and reduced my bill from $92.86 per three months to $59 for three months. Yes, tightwads, that’s a savings of $33.86 per quarter, or about $11 a month, to be spent on something else much more interesting than rotting garbage.

I wasn’t kidding when I said going green could bring you green(backs).

[By the way, I recently made the decision to monetize this blog, meaning I would allow ads on it after eight years of being a no-ad zone, since I am a starving writer and this is one minuscule way I can make a little income to feed our poor bereft children, kitties and chickens. Then I noticed today (the first day of allowing ads) that all this plastic talk is bringing “Buy Our Crappy Plastic, Made in China From Orphan Baby Unicorns” ads directly to my blog. So that sucks. And I’m sorry. And not sure what to do about that just yet. Maybe we can call plastic by a code name. Like “schmashtick” or something. Oh, the perils of workin’ for the Man…]

Step 3: The one thing I am not going to do — perhaps this will surprise you? — is to throw away everything in my house that is plastic (I mean schmashtick). The thing about being green is to use what you have before you recycle it. That means the things we own that are made of The P Word and are still useful are going to keep on being useful.

Please do not fall into the trap, Grasshopper, of thinking that everything that is sold as “green” is really all that green, and that throwing away perfectly serviceable items (hello, landfill) in favor of “green” ones is a good practice. It’s not. I’ve said it before and I’ll say it again, though this time I’ll say it in blank verse: “The best green choice is *always* to buy nothing.” Use what you have and reduce the need for The World to make new stuff, green or toxic, out of wood, paper, unicorn horns or plastic.

At our house, we have Tupperware. We have plastic cooking utensils in the kitchen. We have a plastic tape dispenser on my desk, unless someone has walked off with it, in which case, hit the deck; Mom’s gonna blow up. There is plastic everywhere, but some of it is being used and is functional. I assure you I will find another choice, or do without, when said items wear out and get recycled. But until then, as long as they are harming no one, these pieces of schmashtick will continue to serve their purposes without further impact.

A thought, and some terminology:  A vastly insightful reader posted a comment a few days ago on the Patch version of this blog about the wonder of plastic. She said something like, “We have this amazing medium and it can do amazing things (like make valves for hearts and protect newborn babies or very ill people from germs), but instead of that, we use it for temporary or one-use items and then throw it away. But it still lasts for 1000 years.” Amen, sister. She’s absolutely right. If plastic is doing some durable good in the world, then fabulous — go to it, plastic. (I’ll call this (relatively) Good Plastic.) But to use it once and throw it away — bad. This will be known hereafter as Bad Plastic. 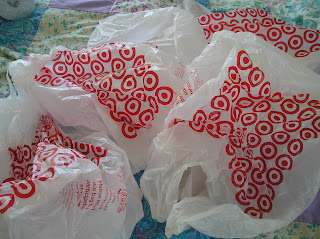 Especially heinous among Bad Plastic is what I’ve started to call Ambient Plastic: the ubiquitous plastic wrap around the top of a bottle of Snapple, the double-wrapping on a loaf of bread, the double and triple bags we’re given at the store that baggers then actually throw away when you try to eschew the bags, and so on. Is all that necessary? The excessive use of ambient plastic is mostly what I’ll be fighting and avoiding in the coming days.

Today, before I even had my first cup of coffee, I ran into a plastic challenge: There was a tag on my new underwear, and the tag was attached with one of those little plastic T-shaped strips that are so beloved in the retail world. I snipped it and tossed it into the bathroom trash can and then went, “Doh!” And I was too squeamish to put my hand into the bathroom trash to fish it out. Plastic 1, Julia 0. It’s pernicious. It’s ambient. It’s everywhere.

2 Replies to “My family is going to hate me”