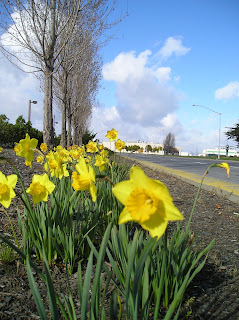 I took this photo this morning — daffodils bursting into bloom at Alameda Point (at the old entrance gate at Atlantic). We have just ONE daffodil at our house — in a container in the front, a bulb I didn’t even know was there. But it doesn’t feel like spring until a daffodil blooms.
Rain caught us by surprise the other night — I left a bunch of stuff outside — tablecloth on the table, pillows on the chairs, some other rescued chairs on the front patio — all soaked, along with cardboard boxes and garden gloves and the bowl of cat kibble. Yuk. At least I don’t have to water 😉 And it’s raining again now (pouring, in fact)! (@3 pm)

We’ve been doing a lot of kitty care at our house lately — our old tomcat ELvis is feeling poorly lately, so poorly that he may be contemplating his final wishes. He caught a bad cold and it’s been persistent, and the poor old guy is unable to breathe through his nose. If you want to feel pity, listen to a cat wheezing for breath. The poor old thing. He’s been to the vet three times in the past two weeks and now we’re doing some hospice care: he’s on an IV drip twice a day to keep him hbydrated, being served warmed chicken baby food to stimulate his appetite (he still won’t eat), and given steam and saline treatments for his clogged nasal passages. Plus antibiotics and lots of love. We don’t know what’s next for Elvis, but send him a warm thought and a hope to get through the weekend. I think he’ll be ok if we can get through the next few days.

In other news…
We are running this colorful ad

in the Sun these days — kinda funny. Suddenly “everyone”is doing a blog. Like they were just discovered by Oprah or something. Wow, so hip to blog! So we decided to run this house ad which shows that blogs are nothing to be scared of, and that we’ve been blogging for the Sun and Alameda for four years already (remember, this one started as my column and online in January 2004 — scroll backward to verify!). We also noted the award we won 9 months ago for blogging. Nobody notices the difference, I suppose, but we’re making a point: we’ve been doing it for some time now, and it’s not really a new thing to do. It’s almost old hat, in fact. My 2 cents, however — just keep reading…in case you can’t quite place the reference in the ad, it’s a tweak of the original The Blob movie poster. 😉

We also spent some time in the past few days getting our entries together for the East Bay Press Club awards. Several of us entered individual pieces — for coverage of the nuclear waste at Alameda Point, several editorials, columns, architectural reporting, features short and long, and more. I also just heard (from fabulous Andrea Lampros) that The Monthly was nominated again for a Maggie Award for best consumer tabloid — for the issue of December 2007, in which my article on Rabbi Chester of Temple Sinai in Oakland ran. Woo hoo! Here’s hoping for good luck in all of these races. the California Newspaper Publishers’ Association awards are just around the corner as well…chalk up another two days to prep entries for that.

This weekend: Big stuff on the Island. Chicago is on at Altarena. There’s a St. Patrick’s Day race at Crown Beach Sunday morning (I may be taking photos). The kick-off training for the parcel tax starts tomorrow at 10 at Longfellow School (I’ll be taking pix). I’m meeting my friend Kirsten for coffee at some point. Most of our kids are gone for the weekend, and I had planned to work in the garden. But with rain? Probably not.

Instead: a date with my camera and all things Alameda, always. Blogs, kittens, Elvis and the IV drip, a date with my Husband as well. Time to sort out my papers, perhaps, and get a little crafty in the kitchen if it’s rainy outside. Homemade bread sounds so good right now.

(See the comments for some clarification of these remarks, friends. Anonymous makes a good point. Thanks, A.)