Went to the National Business Women’s Week awards in town yesterday and was a presenter for one of the awards. This is the same org that gave me the LENA (Woman of the Year) award a few years ago. Lovely, smart women, all of them.

And here we are beforehand, a few of us Alameda gals… 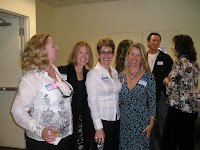 That’s Alison Bliss, Kathie Woulfe, Kathy Moehring, self, and Kathy Shaughnessy behind me talking to Julie Baron of Julie’s Coffee & Tea Garden. Yes, almost everyone in Alameda is named Kathy.